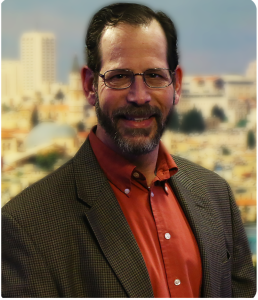 “WHAT’S NEXT FOR THE MESSIANIC/HEBREW ROOTS MOVEMENT?

Chaim Goldman was born and raised in suburban Philadelphia as a Reform (secular) Jew.  Being culturally Jewish (including keeping the holidays and getting Bar Mitzvahed) was always an important part of his family identity, but not faith was not.  In 1995, he became a Believer in the promised Messiah of Israel, Y’shua (Jesus), and immediately began to search out and study, and eventually teach on, the Hebrew roots of Christianity.

Chaim is a serial entrepreneur with a professional background in TV production, as well as sales and marketing.  His great passion is to help other Believes walk in their Kingdom calling and realize their fullest potential.  He also loves teaching the Bible from a Hebraic perspective.  (“The greatest story never told!”)

Ever since he became a Believer, his heart as been to serve the Kingdom with all his talents, including his businesses.  From ProIsrael Production and Israel High Tech TV (both based in Jerusalem), to Biblical Health Television and Kingdom Consulting, Chaim’s work challenges the the Body of Messiah to individually and corporately serve the King.

The Goldman family’s ministry is Repairing the Breach, a work that Chaim was inspired to walk in more than 17 years ago, and has integrated this calling into his life in many ways.     Chaim, his wife of 15 years, Dr. Kim, and their six children currently base out of Miami, Florida, but seek to travel and minister as much as possible.  In the summer of 2016 they drove 7500 around the US and into Canada to preach the Gospel of the Kingdom in Messianic/Hebrew Roots congregations and home fellowships.

Hebraic Home Fellowships is Chaim’s newest work YHVH has called him to, and is a genuinely a culmination of his 50 years of life, training, work, and ministry.